So what happens when this man unites with this being? 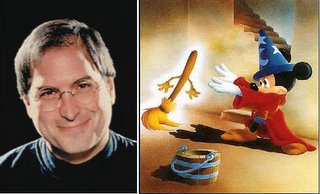 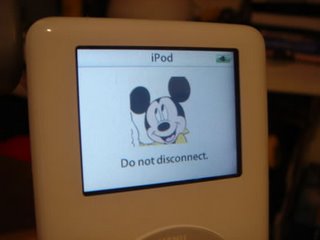 No you silly thing! You start having Mickey Mouse agents all over the globe who think that you $hit money to buy overpriced items for fudging fun such as the ipod family and it’s never ending accessories. The saga begins with a friend of mine giving my ipod the evil eye going 60 GB and pictures too? Lah lah lah ?!

Later on, I try and tune in to my jams in the middle of nowhere: 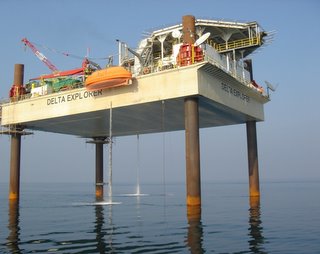 So I start looking for the agent and I call Agent B who says yes sir we are the agents ,but currently we have no tech center, and I am like that’s just as stupid as new parents telling me that yes we do have a baby but the neighbors wash his a$$ every time he $hits all over the place. He never gets the analogy and he thinks I am someone who wants to do MJ a fav.

I call agent A and they go of course sir, our ipod technision is going to have a look at it, and I wonder suddenly there is an ipod technition out there? What about an ipod engineer? Fancy init?
-What do you do for living? Oh I am an engineer.

Anyways, I get there and I had to ,being me, to forget something which in this case was the power cable.Now I have to be honest, I did remember prior to me leaving the house, I just thought big deal : hey! it’s the agent you are going to man!

The first thing the agent asks for: where is power cable sir?

For fudge sake you are the solo tech center and you do not have a power cable?

We do not sir.

Well lets hook it to the puter then shall we?

Wait a minute why am I telling you how to go about your job?!

Two brains better than one sir.

Oh in this case umm then umm.. Okay !

Do you have the bill sir?

No, but you can trace it through apple’s serial number.

Sir you need to take it to the hardware center

He Gives out directions which involve two stores that you would not be able to locate unless you lived in this part of town and at someone point in my childhood I actually did *lucky me.
I arrived there when an inner whisper goes: Hey something is wrong! There is nothing here that says apple, no hardware no software.. this is a junk yard! There were some old T.V’s, some Old printers , some old everything but Apple stuff.

Plenty of happy phillpinos and Indians throwing papers at each other.

Oh how قan we help you?

Umm is this apple store?

I leave it with them and as a proof; I show them the unused headphones the Indian man goes : tsk tsk…. berry berry Unlucky!

Yeah well I will be waiting. Next morning:

Oh the Teقnition is out right now.

And what do you expect his tech-ness to show his a$$?

We will gib you a قall ,sir.

I call saying the following : ” In the name of Mickey Mouse most laughable and absurd. The god your company believes in, since it’s a mickey mouse company, when will I ever receive my IFREAKINGPOD?

The teقntion is having many ipods sir!

What are you kidding me?

My uncle cracks up saying: ” if I was him man I would hang up saying (customer service isn’t necessarily Disney land Sir, sometimes it’s painful A$$hole)

A week after I call going ” Hi my name is Raed and I have a bad headache .NOW, you’re going to ask me why I do?”

Right.. get me your boss.

Hello hi, my name is Raed I have a bad headache care to ask why?

Because I have paid 2500 Dirhams for something I am not getting do you understand how frustrating it is?

Yes, our guy looked at it, and he says it needs to be reclaimed.

How long is that gonna take hot shot ?

Remember when you cried so hard as a kid, and you went out of breath? That is how I’ve felt and sounded for the rest of the day.