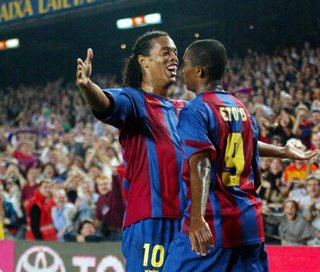 Suddenly, and maybe I was taking a nap, every single soul within 11000 Km^2 has become interested in soccer and not just any league; The Spanish League (or La liga) okay them people know all about soccer and it is fun to watch sometimes.. But here are few cases of extremism where I go FUDGING STOP:

Buying everyone a treat because Barcelona Fudging won I say buddy “ Fudging get a reality check and smell the coffee! You are a middle eastern and your mother ain’t Spanish so easy now!”

People changing their nicks on MSN and going ballistic at each other because of a league in a country they have never been to, where people speak a language those so called oversees fans are unaware of.. (should you raise your eyebrow at this, going so what? It means you are one of the OFF (Oversees Football Fans) Fudging get out of my blog A$$hole… I ran away from people like you..

Does it get better raed? You betcha : Arguing and analyzing every single game up to the point where the frequency and the pitch of the BiT^#es voices get so high I have to step in and redo the reality check (an art of it’s own ).. I usually start with: Abdullah My friend I have graduated with a B.S (bull shit) in Engineering.. and you? Oh so you did not major in football.. he cuts me off and I cut him off saying : and when was the last time you exercised ? Am sorry Abdullah throwing cards while playing baloot is not considered working out your biceps!
Aljazeera sport, al jazeera 1, aljazeera 2, al jazeera 173*2673 = God knows what the heck? I am not sure that Spanish people are as fanatic as our middle eastern fans have become.

Conclusion : this phase of denial and refusal to accept that the local league sucks should change as soon as possible as I can only and sadly agree with the author of this

we do have an identity problem and a deep one too!